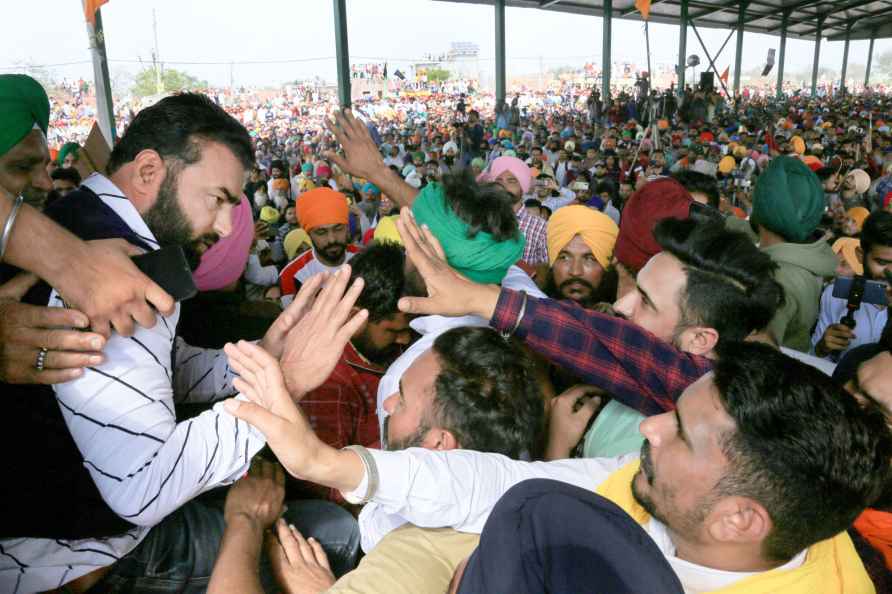 [Bathinda: Lakha Sidhana (L), who is wanted in connection with the violence in Delhi on Republic Day, meets his supporters as he arrives to join farmers' protest against the new farm laws, in Bathinda, Tuesday, Feb. 23, 2021. ( /PTI] Chandigarh, Feb 23 : Delhi violence accused and gangster-activist Lakha Sidhana on Tuesday dared police to arrest him as he addressed a public rally he called in Punjab's Bathinda as a show of strength and to express solidarity with those facing police action for supporting the cause of the protesting farmers. However, leaders of the Samyukta Kisan Morcha distanced themselves from the 'mahapanchayat' that saw tens of thousands of people largely comprising the youth and the women at Mehraj, the ancestral village of Chief Minister Amarinder Singh. Sidhana, who is carrying a reward of Rs 1 lakh for providing information about him, has been booked by Delhi Police for instigating violence during the farmers' tractor rally at Red Fort on Republic Day. "If Delhi Police come to arrest anyone in Punjab, villagers will gherao (surround) them," Sidhana said at the rally, indirectly referring to his arrest. After the rally, he left the venue on a motorcycle. The rally was called to express solidarity with Deep Sidhu, Sidhana, Nodeep Kaur and other arrested people associated with the farmer agitation and "to give a message that youth is upbeat and not defeated or disappointed". Calling to intensify the agitation, speakers at the rally favoured that reins of the agitation should be handed over to the youth. They asked the farmer union leaders to show big heart by saying "they are with every youth of Punjab who are being prosecuted by Delhi Police". The leaders should raise their voice for all such youth so that governments should know that we are one, the leaders advocated. Earlier, in a video post, Sidhana had asked people to turn up in large numbers at Mehraj village to show their support for the protesting farmers. "We have been agitating for seven months. Now, this protest is at its peak...we are holding a big programme in village Mehraj in district Bathinda on February 23," Sidhana had said. Grandfather of farmer Navreet Singh, who had died in New Delhi on January 26, and AAP legislator Kultar Singh Sandhawa were among those who attended the rally. Lakhbir Singh alias Lakha Sidhana, named as one of the main accused for the violence on Republic Day, dreamed of making big in politics through the farmers' agitation. Since November 25, he had been quite active in the agitation on the borders of the national capital and aggressively lobbying for the agitation to gain momentum. Sidhana, a small-time gangster who aims to enter politics by reflecting himself a social activist, was acquitted in several cases before contesting the 2012 Assembly polls as a candidate of the People's Party of Punjab, once led by Manpreet Singh Badal, who is currently the Finance Minister in the Congress government in Punjab. Farmer leaders have, in fact, now distanced themselves from Sidhana and are now blaming him and Deep Sidhu for inciting violence at the Red Fort. Sidhana belongs to Sidhana village in Bathinda district. At one point of time, he used to work for the Shiromani Akali Dal (SAD). He was first jailed in 2004 and was put behind the bars many times till 2017. Of late, he hogged the limelight as a social activist by demanding that all official signboards, other than English, should be in Punjabi first. Along with Sidhana, Punjabi actor-turned-activist Deep Sidhu, who was seen as protesters swarmed the Red Fort and even put up a religious flag on its ramparts, has been named the main accused in the violence. He has already been arrested by Delhi Police. /IANS

32 killed as 2 trains collide in southern Egypt
[Egypt: This image provided by Youm7 shows crowds of people gathered around mangled train carriages at the scene of a train accident in southern Egypt

Canberra, March 26 : Australian police announced on Friday that it charged two men with allegedly running a "sophisticated terrorist network", which helped locals to travel to Syria to join violent ex […]

Los Angeles, March 26 : The University of Southern California (USC) has announced an $852 million settlement to resolve lawsuits from hundreds of women over sexual abuse by the university's former gyn […]

Canberra, March 26 : Australian Prime Minister Scott Morrison has confirmed that two Ministers, who are presently on leave amid a sexual assault crisis, will remain after a Cabinet reshuffle. Mo […]

Houston, March 26 : The number of people in the US state of Texas who died due to a massive winter storm last month has increased to 111, according to the latest data issued by the Department of State […]