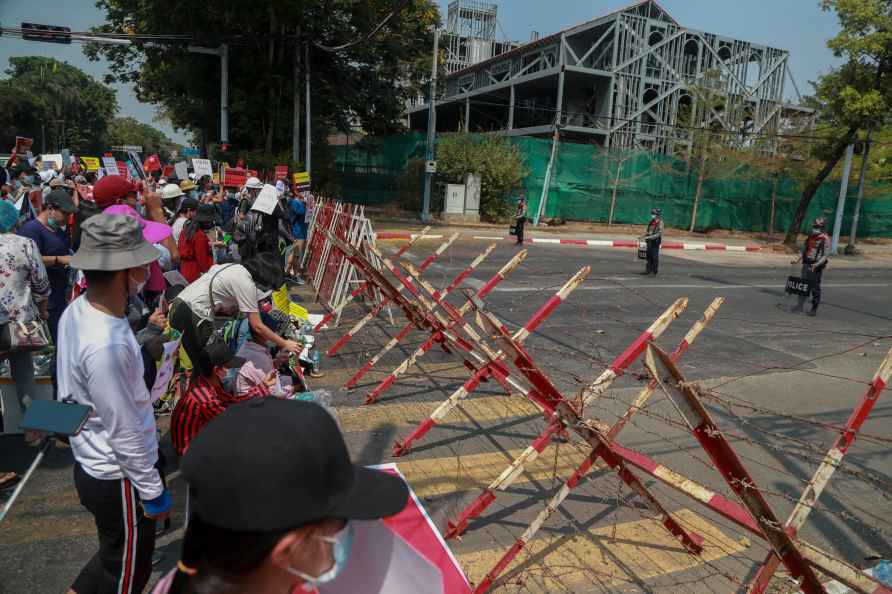 [Yangon: Demonstrators gather close to Indonesian Embassy in Yangon, Myanmar, Tuesday, Feb. 23, 2021. Anti-coup protesters gathered outside the embassy following reports that Indonesia was seeking to have fellow members of the Association of Southeast Asian Nations to agree on an action plan over the Myanmar.......s coup that would hold the junta to its promise to hold free and fair elections in a year.......s time. /PTI] Peshawar, Feb 23 : 20 Pakistan Tehreek-e-Insaf (PTI) lawmakers from Khyber Pakhtunkhwa, including two former ministers who were recently expelled from the cabinet, missed the meeting called by Pakistan Prime Minister Imran Khan. Minister Shaukat Yousafzai played down any significance of the absentee lawmakers, saying that those lawmakers had already informed the Prime Minister as well as Chief Minister Mehmood Khan about their prior engagements, the Express Tribune reported. During a visit to the provincial capital, Imran chaired a meeting of the Khyber Pakhtunkhwa cabinet and PTI members of the provincial assembly at the Governor's House. The meeting took place against the backdrop of the PTI's loss in the recent by-polls in Nowshera. According to sources, 14 National Assembly members (MNAs) and six members of the provincial assembly (MPAs) from the province did not attend. They included two former cabinet ministers, Sultan Muhammad Khan and Liaquat Khattak. Two of the absentee members were stated to be out of the country. The absentee members were quoted as saying that they could not come to the meeting due to various others engagements, the government sources confirmed. When contacted, Yousafzai said that the lawmakers did not attend the meeting with the permission of the prime minister. The provincial minister insisted that they were all in touch with the party leadership and committed to the party discipline. During the meeting, Prime Minister Imran reiterated his resolve to uphold transparency in the democratic system, saying that his politics was aimed at serving the masses and working for the betterment of coming generations. During the meeting, a detailed presentation was given to the prime minister on the ongoing development projects across the provinces, especially in the merged tribal districts. The overall political situation and party's matters were also discussed. "The manifesto of the PTI is to serve the masses wholeheartedly and without any discrimination," Imran told the party's lawmakers. "Unfortunately, some people joined politics to make money rather to serve the people," he added. "A nation is destined to doom when it loses morality and cannot distinguish between right and wrong," he added. He added that the country was lagging behind in various fields because politicians come into power to "steal money" instead of utilising it [the public office] for public service. On the occasion, lawmakers backed Prime Minister Imran Khan's vision and lauded his ideas. Separately, Prime Minister Imran met Khyber Pakhtunkhwa Governor Shah Farman and Chief Minister Mahmood Khan. Imran visited Peshawar days after the party suffered a shocking defeat in Nowshera during the by-election last week. After the loss, the government expelled Liaquat Khattak, brother of former chief minister and current defence minister Pervaiz Khattak for campaigning for the rival candidate. The by-polls were held on Friday on NA-45 Kurram-1, NA-75 Sialkot-VI, PP-51 Gujranwala-1 and PK-63 Nowshera-3. The PTI lost both the provincial assembly seats in Punjab and K-P. The party won NA-45 Kurram but the results of NA 75 has been put on hold by the Election Commission of Pakistan (ECP). The ECP stopped the announcement of the result amid allegations of rigging. The ECP itself expressed suspicion that the results might have been tampered with and decided to conduct inquiry into the delayed results from 20 polling stations in Daska. With the PTI claiming victory in the by-polls, the opposition Pakistan Muslim League-Nawaz (PML-N) demanded re-election in the constituency. However, in a statement on Monday, Imran asked his party's candidate, Ali Asjad Malhi to seek re-polling in the controversial 20 polling stations. "Have always struggled for fair & free elections. So even though there is no legal compulsion to do so before ECP announces results, I would request our PTI candidate to ask for re-polling in the 20 polling stations. Opposition is crying hoarse over in the Daska NA-75 by-election," Imran tweeted. Imran also said that his party had been calling for open ballot in the upcoming Senate elections to ensure transparency in the electoral process. "It is because we want transparency that we are seeking open ballot for Senate elections." The premier said his party always wanted to strengthen a fair and free election process and lamented that other political parties lacked this commitment. "We will always seek to strengthen a fair and free election process. Unfortunately others lack this commitment." /IANS

[Moscow: Russian President Vladimir Putin, left, and Russian Defense Minister Sergei Shoigu attend a wreath-laying ceremony at the Tomb of the Unknown Soldier, near the Kremlin during the national cel […]

Mumbai, Feb 22 : Actor Punit J Pathak says he underwent physical transformation for his new role as a cop in the youth thriller LSD: Love, Scandal & Doctors, which marks his debut on OTT. On bei […]