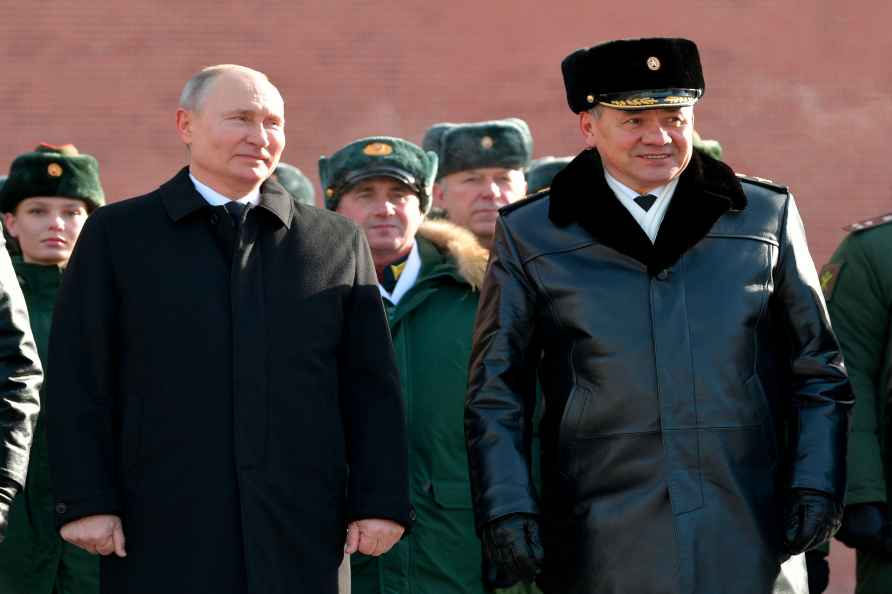 [Moscow: Russian President Vladimir Putin, left, and Russian Defense Minister Sergei Shoigu attend a wreath-laying ceremony at the Tomb of the Unknown Soldier, near the Kremlin during the national celebrations of the 'Defender of the Fatherland Day' in Moscow, Russia, Tuesday, Feb. 23, 2021. The Defenders of the Fatherland Day, celebrated in Russia on Feb. 23, honors the nation's military and is a nationwide holiday. /PTI] By Atul Aneja New Delhi, Feb 23 : The India-China rivalry has now pushed into the Russian Far East, where Modi administration is planning significant investments in the energy and other sectors. China is a top investor in the region, but the Russians wary of putting all their eggs in the Chinese basket are welcoming India's footprint in the area. During a recent visit to Moscow, India's Foreign Secretary, Harsh Shringla repeated India's deep interest in Russian Far East, a region which President Vladimir Putin wants to develop as a signature initiative. "We see that as a very high potential area, where we can develop new sectors and help companies looking to invest in new areas such as coking coal, timber, liquid natural gas," he said during an address to the Russian Diplomatic Academy. "There is huge potential there." The Far Eastern Federal District is the largest of Russia's federal districts, constituting a little over 40% of the country's territory. The region is also home to much of the nation's resource wealth, including oil, natural gas, gold, diamonds, coal, timber and fish. Yet with a population of just over 6 million people, the Far East is also Russia's least populated region, and its numbers have only been dwindling since the collapse of the Soviet Union. India's Far East story began in earnest two years ago. During a 2019 visit to the Far Eastern port city of Vladivostok, Prime Minister Narendra Modi announced that New Delhi would pitch in a $1 billion loan to foster the region's development. He also signed a memorandum to anchor a direct maritime corridor between Vladivostok and Chennai. Unlike the European sea route which takes 40 days, the new corridor will consume only 24 days. India's deepening interest follows major Chinese inroads in the region. Over the past several years, China has emerged as the Far East's primary foreign investor and trading partner. In 2019, the country accounted for over 70% percent of all direct foreign investment in the region and 28.2% of its foreign trade. To counter China's heft, India is keen to bring wealthy Japan to the Far East table. Last month, delegates from India, Japan and Russia concluded their first Track II negotiation to nail Far East projects. The trio has identified energy, coal mining, diamond processing, forestry, agro-industry, transportation and pharmaceuticals as areas for a trilateral partnership. "Everyone understands that relying on China as a monopolistic buyer is very dangerous," Artyom Lukin, a professor of international relations at Russia's Far Eastern Federal University was quoted as saying the Nikkei Asia. "It is here that the interests of Russia and India converge. There is a real opportunity for India to position itself as an alternative to China on a whole range of important export goods." (This content is being carried under an arrangement with indianarrative.com) /IANS

[Moscow: Russian President Vladimir Putin, left, and Russian Defense Minister Sergei Shoigu attend a wreath-laying ceremony at the Tomb of the Unknown Soldier, near the Kremlin during the national cel […]

Mumbai, Feb 22 : Actor Punit J Pathak says he underwent physical transformation for his new role as a cop in the youth thriller LSD: Love, Scandal & Doctors, which marks his debut on OTT. On bei […]