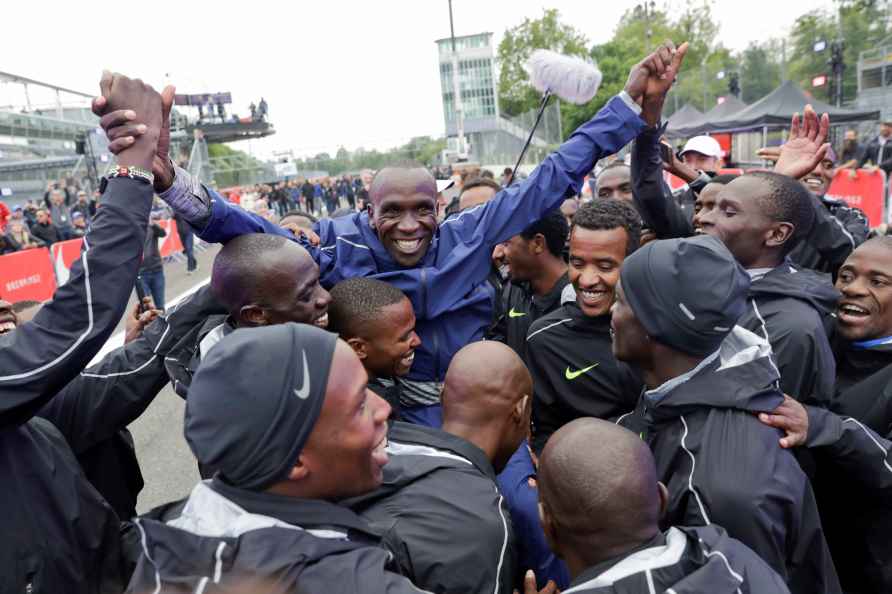 Monaco, Feb 15 : Beatrice Chepkoech of Kenya has set a new 5km road world record, completing the Monaco Run in 14 minutes and 43 seconds. Sunday's performance by Chepkoech bettered the previous record in a mixed gender race of 14:48 set by Caroline Kipkirui in 2018, and is also one second faster than Sifan Hassan's 14:44 record for a women's-only race, until this morning the fastest time ever produced over the distance since the 5km was introduced as a world record event in November 2017, reports World Athletics. "I'm so happy because I didn't expect it," said Chepkoech, the 2019 world champion in the steeplechase. "It was cold and there was a lot of wind, but I tried to follow my pace maker and everything was perfect," added the 29-year-old Kenyan. Meanwhile, Uganda's 10,000m world champion Joshua Cheptegei, who set the men's world record of 12:51 at this race last year, successfully defended his title, clocking 13:13. "The wind was incredibly difficult," said Cheptegei, who covered the opening kilometre in 2:44, 13 seconds behind the pace that propelled him to the world record last year. /IANS

Australia pull out of relay Worlds due to Covid-19 fears
Sydney, April 11 : The organisers of the 2021 World Athletics Relay Championships in Silesia, Poland suffered a setback as Athletics Australia (AA) co

KGMU turns Covid hospital, Trauma Centre to continue as before

Lucknow, April 19 : Bowing to mounting pressure, the King George's Medical University (KGMU, one of the premiere Covid hospital in the state, has decided that the Trauma Centre will continue to functi […]

London, April 19 : An increasing number of people in the UK have developed tinnitus for the first time or have seen their symptoms worsen after a Covid attack, according to a media report. Tinni […]

CR man 'out-races' speeding train to save kid in Thane

Thane, April 19 : Displaying rare courage and presence of mind, a Central Railway employee raced an oncoming express train to save the life of a young boy who had fallen on the railway track, official […]

London, April 19 : UK Prime Minister Boris Johnson has cancelled his trip to India in the wake of the severity of the second wave of the coronavirus pandemic in the country, a Downing Street spokesper […]